Our Pilot Programme in Casamance

The Casamance is a low-lying region in Senegal between the Gambia and Guinea-Bissau, cut through by the tidal part of the Casamance River which is wide and salty. To the west, a honeycomb of small channels winds through the mangroves, where hidden villages, only accessible by boat, are revealed by the appearance of children dressed in a rainbow of bright colours, screaming and laughing on the shore, and beckoning us to come and visit. 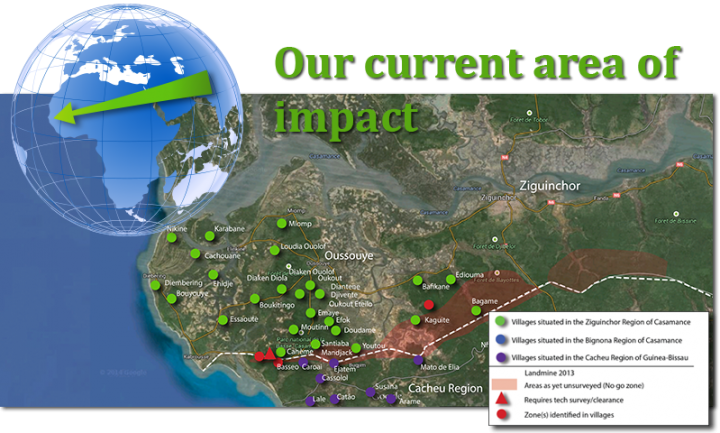 The land is rich with fruit and the water abundant with sea life. As the Midwest is America’s bread basket, so the Casamance is Senegal’s fruit bowl, as well as being the fish larder for a great part of western sub-Saharan Africa. As we travel by pirogue through the web of water systems we see oysters clinging to the roots of the mangrove; on the beaches are strange long low structures made of sticks where fish are drying out in the hot sun for export throughout the region. 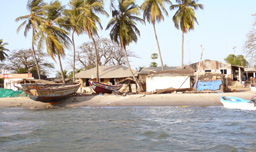 Further from the water, hidden amongst the lush forest, are orchards hanging rich with oranges, bananas, papayas, mangoes and more. “Oh, the taste of the delicious cashew apples that become ripe before the nut forms! I challenge anyone to eat this fruit without dribbling it all down your chin. Impossible! How the children laugh as they watch us visitors try”. 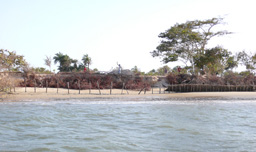 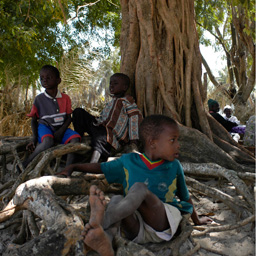 The population is predominantly Jola. A warm and welcoming people, short and stalky, they are in sharp contrast to the long and lean Wolof of the north. The Chief of the village is generally someone who is accepted by consensus to be the wisest among them and is looked to more for guidance than for leadership. Traditionally, the Jola have made decisions by consensus. 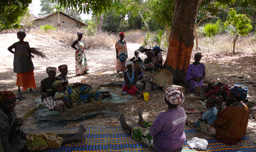 “I wandered into what is used as the village square which has several enormous trees giving shade with their branches and ample seating with their enormous roots protruding from the ground. It seemed all the village was there, chatting in small groups. Occasionally the people would move from one group to another. It appeared to me as if the whole village was present. I was informed, that indeed, this was a village meeting. Everyone’s thoughts and ideas were not only being heard, but considered and discussed by all”. 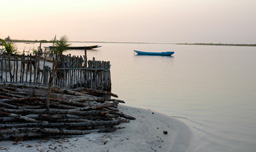 The region of Casamance is facing two great challenges at the moment. They are involved in post-war reconstruction after a civil war with the north, which has left much of the fertile forests and orchards mined, as well as many people handicapped. However, more devastating and insidious, are the immediate and long-term effects of climate change. We have already seen in some places up to 30 metres of coastline washed away in one go. Along the mangroves we see the trees falling into the water as their roots are washed out from under them. Rice paddies are being abandoned as the land becomes salinated. But the greatest danger to the people of the Casamance is the salination of their water table. People can not survive without fresh water. 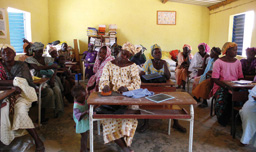 After a long day’s work and before the preparations for dinner begin, the women pause to gather in the early evening for their turn in the one-room school. Most of these women not only cannot read or write but haven’t even had the opportunity to learn the national language of French. 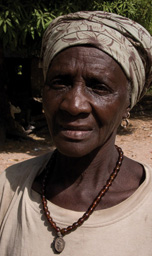 Anna, as the oldest and wisest person in the village, is considered like a chief. If the villagers must make an important decision, either in their personal lives or for the whole community, it is Anna’s advice that they seek. With the Jola, a chief is an advisor and the community makes group decisions.

Lisa, eight years old, not only collects the family water 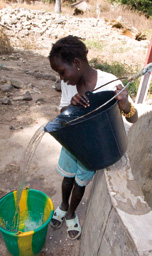 hand-over-hand from the well, but must also carry 3-4 kilos of millet on her head to the neighbouring village of Boucote which is 5 kilometres away as her village, Bouyouye, has no grain mill. One of the first things Fair Winds Trading Company will buy with its profits is a mill for the grain so that Lisa will have more time for her homework. 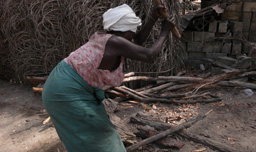 Binta is the grandmother of a very large family. Here we see her chopping wood that she has collected in the forest. She has lost not only her husband, but also all of her children to disease and the recent conflict. She provides and cooks the food for her large family of grandchildren and great-grandchildren. In this community, all the children who are old enough to lend a hand are away at school for most of the year. A small gas ring and bottle would not only decrease her workload by 30% but also protect the forest. 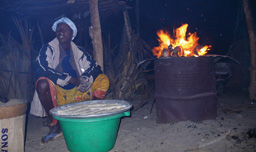 “I met Bell the first winter I lived in the Casamance. I have seen her lose two children as well as her husband. On returning the third winter, I found her in front of the palm frond hut that she had built by hand, baking bread to sell in the village in an old steel drum that she had converted into an oven. We see her here at 5am, her seven daughters sleeping soundly in their own home as Mama bakes the bread. Fair Winds Trading Company would like to buy Bell the bricks to build a proper oven.”

Some of our first purchases will be a pump for the well, a mill for the grain 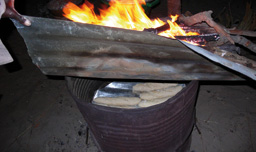 and gas rings and bottles for individual homes. Next on the agenda is to help the village acquire autonomous energy, through solar panels and wind generators, so that the children can do their homework and the women can cook without straining their eyes.

to stay up date